Apollo Blinds has won an award after being recognised by the window blinds industry’s trade body for our marketing campaign during the pandemic.

We won the Best Marketing Programme accolade at the British Blind and Shutter Association (BBSA) Awards after judges commended us for the way we planned, implemented, delivered and tactically adapted a multi-layered marketing plan during the pandemic.
Receiving the award, our Business Development Director, Matt Thomas, said that he was proud to collect the award on behalf of the management team and the network of franchisees – and added that achieving this award was a collective effort.

“We faced stiff competition for the award, as we were up against some very strong brands in the window blinds industry. It was an honour to take to the stage to collect the award on behalf of everyone at Apollo Blinds,” said Matt.

During the global pandemic, we repositioned ourselves in the blinds market, and this was encapsulated by the introduction of our brand statement: “Superior window blinds and shutters since 1972”. As a result, we have been able to clearly evidence that this subtle shift has been the catalyst for delivering strong growth over the last couple of years.

Our BBSA Best Marketing Programme accolade came just weeks after we were named the winner of the Continuous Improvement category of the Best Franchise Awards – for the second year in a row.

We won the award for setting a new record for the satisfaction levels of our franchisees after conducting our fourth annual Franchise Satisfaction Benchmark for 2022. We saw the overall satisfaction score from our 50-strong network of franchisees increase by 8% on the previous year, taking our score to 84%.

On winning this award, Matt said: “Apollo Blinds is a great place to be for anyone who wants to run their own business as part of our network. We are reaping the rewards of having a clear strategy for achieving strong growth, attracting more new franchisees and having a network of people who enjoy running profitable and prosperous businesses as part of our network.” 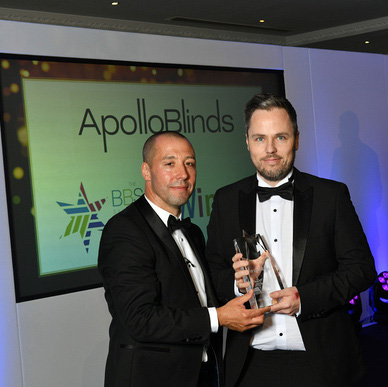